METROMOD is pleased to foster a transdisciplinary and transnational discourse on the theory and methodology for researching exile, cities and modernities. As a kick-off for our upcoming second book “Urban Exile” we invited researchers and artists for an online panel in December 2020 and January 2021. 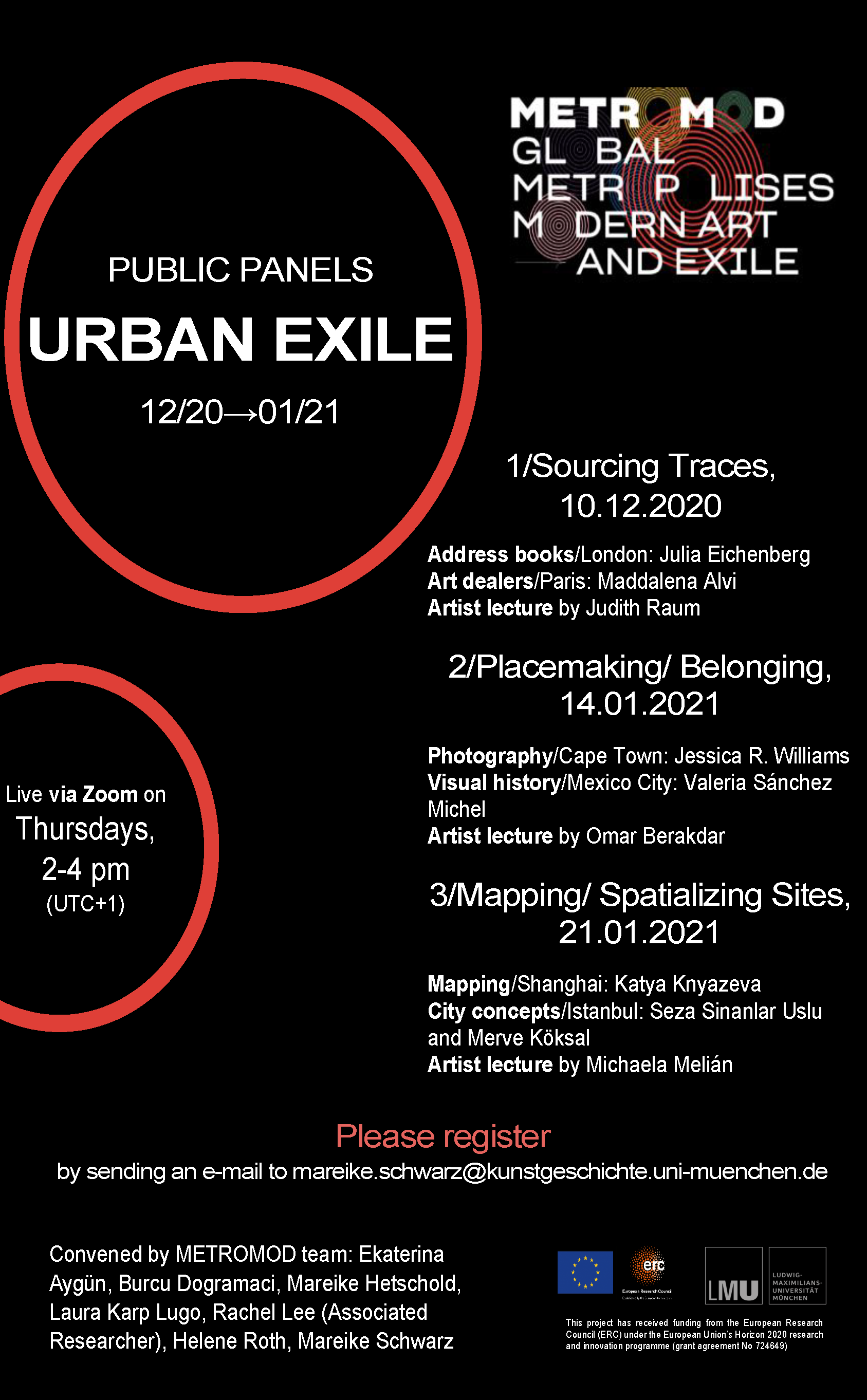 Taking a historical perspective, the three panel sessions focus on dislocations in the first half of the 20th century, when modern movements constituted themselves in global exchange. Our aim is to rethink, how exile and migration may be examined under a glocal, urbanistic perspective. In cities around the world e/migration contributed significantly to the transformation of urban spaces by forming new communities as well as cultural zones. Experiences of exile by locals and migrants alike shaped the intertwining of urbanity and creative practice. Thematically 1/Sourcing Traces keeps track of exiles’ visual and written legacy. While the panel 2/Placemaking/ Belonging addresses spatial and affective appropriations within exile cities, 3/Mapping/ Spatializing Sites marks territorial movements of in- and exclusion.

Drawing on examples from a wide range of urban centres around the world, contributors from diverse scholarly fields will share theoretical approaches as well as (artistic) research methods relating to the challenges and benefits surrounding the nexus of exile and urban research. In addition, each session will include a lecture by a contemporary artist dealing with exile followed by an open discussion to enable an extended horizon of thinking.

The panels will be held in English. Participation is free.
Please REGISTER by sending an e-mail to mareike.schwarz@kunstgeschichte.uni-muenchen.de. A message with the Zoom-Link will be sent to you in good time before the session you registered for.
Convened by METROMOD Team/Institut für Kunstgeschichte, LMU München: Ekaterina Aygün, Burcu Dogramaci, Mareike Hetschold, Laura Karp Lugo, Rachel Lee (Associated Researcher), Helene Roth, Mareike Schwarz
Administration and Assistance: Christina Lagao, Maya-Sophie Lutz
https://metromod.net.
This project has received funding from the European Research Council (ERC) under the European Union’s Horizon 2020 research and innovation programme (grant agreement No 724649).

THE PANELISTS (in order of appearance)

Julia Eichenberg is a Freigeist Fellow at the Department of History, Humboldt Universität zu Berlin and principal investigator of the research group “The London Moment”, funded by the Volkswagen Foundation. After studying Modern History, Political Science and Anglophone Literature in Tübingen, Münster and Sussex/Brighton, UK, she has been awarded a PhD in Modern History by the Eberhard-Karls Universität Tübingen in 2008 for her research on Polish veterans of the First World War. Eichenberg has published on exile, violence, pacifism, veterans’ welfare, and international collaboration. Recently, she co-edited a special issue of Studies in Contemporary History on Contemporary Legal History. Her current research project “The London Moment” explores the transnational collaboration of governments-in-exile in London during the Second World War and its impact on European political communication in the 20th Century.

Maddalena Alvi is a PhD candidate at the University of Cambridge, where she is working on a history of the European art market during the First World War. She holds an MSc in Economic and Social History from the University of Oxford and an MLitt in Art History from the University of Glasgow. Her graduate studies were funded by the Arts and Humanities Research Council UK and Studienstiftung. Before starting her PhD, she interned for museums, galleries and auction houses in Switzerland, Austria, and Russia, worked for private foundations and managed a private art collection in London. Her latest publication is a peerreviewed article on the German art market during the First World War.

Judith Raum lives and works in Berlin. After studying art in Frankfurt am Main and New York, she completed her master’s degree in philosophy, art history and psychoanalysis at the University of Frankfurt in 2006 with distinction. Her work seeks the symbiosis of artistic and scientific (epistemological) formats, includes performance lectures, artistic works based on detailed research, and aesthetic discussions of philosophical issues. The works of the Villa Romana fellowship holder have been shown in solo exhibitions at SALT Beyoğlu, Istanbul (2015) and the Heidelberger Kunstverein (2014), among others. Her publication eser was published by Archive Books in 2015.

Jessica R. Williams is a PhD candidate at Harvard University where she studies modern African art history with an emphasis on the continent’s histories of photography. Her research engages the intersections of modernist, feminist, and leftist histories and has been generously supported by the Smithsonian Institution’s National Museum of African Art, the Fulbright Program, and Harvard University. Her most recent work can be found in the journal October (Summer 2020) and in Women and Photography in Africa: Creative Practices and Feminist Challenges. Williams is currently a curatorial fellow at the Harvard Art Museums in the Division of Modern and Contemporary Art and is based in Cape Town.

Valeria Sánchez Michel received her Ph.D. from El Colegio de México. She was a research associate at the Chaire Nycole Turmel sur les espaces publiques, at the University of Quebec in Montreal (2015). She has done historical research and has publications on the formation of institutions and the construction of the Ciudad Universitaria of the UNAM. Valeria teaches in the BA of Art History and in the MA of Art and MA of History. She is coordinator of the MA course Art Studies, Art Department of Universidad Iberoamericana and is also Director of the Revista de Arte Ibero Nierika.

Omar Berakdar, Syrian photographer and media artist, founding member of Fanak Fund and as well the founder of ArthereIstanbul, a welcoming and innovative art space in Kadiköy, Istanbul. He has a degree in science (applied chemistry) from Damascus University and he studied Media Art Histories in Donau University Krems / Austria. Over the last ten years, he has several exhibitions of his work and also initiated a wide range of cultural events and curated exhibitions in Syria and Turkey. He is tireless in his efforts to support emerging artists.

Katya Knyazeva, from Novosibirsk, Russia, is a historian and a journalist with a focus on urban form, heritage preservation and the Russian diaspora in Shanghai. She is the author of the twovolume history and photographic atlas Shanghai Old Town. Topography of a Phantom City (Suzhou Creek Press, 2015 and 2018). Her articles on history and architecture appear in international media and in her blog http://avezink.livejournal.com. Knyazeva is presently a Research Fellow at the University of Eastern Piedmont, Italy.

Seza Sinanlar Uslu completed her Art History PhD at Istanbul Technical University. Since 2015 she is Assoc. Prof. at Yıldız Technical University, Faculty of Art and Design. Between 20072009, she was the Istanbul Coordinator of the EU project MELT – Migration in E urope and Local Tradition.  Since Istanbul was the European Capital of Culture in 2010, she undertook the role of assistant coordinator of the “Creative Cities and Creative Industries” Symposium which was supported by UNCTAD. While her academic studies are mostly focused on the cultural and artistic life that develops in the multicultural environment of the 19th  20th century in Istanbul, she has also curated various exhibitions such as “In Pursiut of an artist: Mario Prassinos” at Pera Museum (2016).

Merve Köksal has been a Ph.D. student in the Department of Fine Arts at Akdeniz University, since 2019, where she is employed as a research assistant. After a BA degree in Fashion Design from Izmir University of Economics (2015), she studied in the Department of Art and Design at Yıldız Technical University (20162019) then obtained her MA from Akdeniz University (2019). During the summer of 2020, she was a visiting researcher and a project contributor in OrientInstitut Istanbul. Focusing on underground life in the LateOttoman period, she is interested in the cultural history of Istanbul.

Michaela Melián, visual artist and musician, lives in Hamburg and Munich. She is a member of the band F.S.K. Since 2010 she has been teaching as professor for time-related media at the Hamburg University of Fine Arts (HFBK). She is also involved in the advisory board of the project “Künste im Exil” of the German Exile Archive 1933-1945.Her multimedia installations, radio plays and sound works have been exhibited at Lenbachhaus Munich, Staatsgalerie Stuttgart, Kunsthalle Hamburg, Cubitt London, Ludlow New York and Fundació Juan Miró Barcelona. In 2010, she was commissioned by the City of Munich to create Memory Loops, an acoustic memorial to the victims of National Socialism.