The panel “Placemaking/ Belonging” took place as a kick-off for a transnational and transdisciplinary discourse on the occasion of METROMOD’s second book “Urban Exile”.

On the panel series “Urban Exile”

The panel series “Urban Exile” took place as a kick-off for a transnational and transdisciplinary discourse on the occasion of METROMOD’s second book “Urban Exile”.

The series followed the question, how historical exile, flight and migration could be examined under a glocal, urbanistic perspective? Each session included two research lectures from the book’s authors as well as one talk of a contemporary artist dealing with exile.

Against this extended horizon of thinking the public panel series “Urban Exile” contributed to the theory and methods of research on exile, cities and modernities. By choosing the term exile as a central category for methodological investigations of urban culture, we aimed to rethink its application in a transcultural, global context. Although it is widely accepted that migration shapes cities, until now, exile research has rarely been written from an urban perspective.

Taking a historical perspective and negotiating it artistically for the present, the online panels focused on dislocations in the first half of the 20th century. Back then modern movements constituted themselves in global exchange. In cities around the world e/migration transformed urban spaces by forming new communities as well as cultural zones. Experiences of exile by locals and migrants alike shaped the intertwining of urbanity and creative practices.

For a start, we were happy to give a more complete idea about our project to our guests by giving the floor to Pim van Bree and Geert Kessels from LAB1100 who are busy with creating a database that will work as an archive and a basis for visualizations for METROMOD.

Panel two of the public panel series “Urban Exile” on 14 January 2021 was devoted to the topic “Placemaking/ Belonging” and addressed spatial and affective appropriations within exile cities. Drawing on examples from a range of urban centres around the world, the contributors shared methodologies relating to the challenges and benefits surrounding the nexus of exile and urban research. We deliberated relations between belonging and artists wondering what exactly allows us to think that belonging (being something personal) has some relations to this or that particular artist. The limits of working with photographic sources as well as dealing with the decontextualization of images and measuring their reliability in relation to what they represent were discussed. Last but not least, we had a chance to share our thoughts on the possibility to speak about place-making and belonging in cases when there are no contacts with locals or when exchanges with local people are not very intense. 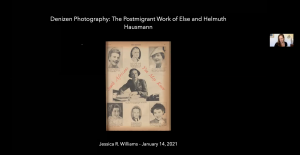 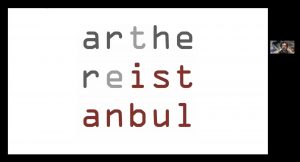 The first speaker of the panel, the art historian Jessica Williams from Harvard University, focused on denizen photography in Cape Town. In her talk, she reflected on how photographs along with the written sources could shed light on the depiction of the new urban context by a person in exile. The second speaker, the art historian Valeria Sánchez Michel, who is a coordinator of the MA course Art Studies at the Art Department of Universidad Iberoamericana, presented her research on visual history in Mexico City. Taking as a case study Calle de López, a small street in the center of Mexico City, her talk focused on the history of common people’s exile. Social spaces and networks of Spanish exiles are thus brought to light in this micro-scale one-street-research.

The third speaker of the panel, the Istanbul-based artist Omar Berakdar, came up with some of his projects as well as introduced ArthereIstanbul, a welcoming and innovative art space in Kadıköy, Istanbul. Omar Berakdar is a founder of ArthereIstanbul that was initially created by and for Syrian artists with difficulties accessing workspace after leaving their country. Now it is a space for artists from all around the world where they can work together and support each other.

We were very pleased to have a vigorous exchange between the panelists and the audience as it helped us to obtain a deeper insight into the topic. One of the main points of discussion was the importance of language as a key to integration into local artistic communities and the significance of awareness as well as understanding of local cultural aspects which help not to avoid contacts with locals. Another relevant point was that each exile case needs to be differentiated and contextualized since subsumizing them under a broader narrative may result in incorrect conclusions. We have had the impression that the panel turned out to be meaningful dialogue and fruitful meeting for all of us.