Twenty-five kilometers from Buenos Aires, following the river Río de la Plata to the North, stands Villa Ocampo. Its last owner, Victoria Ocampo (1890-1979), an Argentinian intellectual, writer, publisher, founder of Sur magazine, translator, and patron of the arts, is a key figure in my research on exiled artists in Buenos Aires. She moved back to this house, where she had spent her childhood, after inheriting it from Francisca Ocampo de Ocampo “Tia Pancha”, her godmother, in 1941. Located at Elortondo Street, 1837, Villa Ocampo was built in 1890 in San Isidro as the family’s summer residence. Manuel S. Ocampo, Victoria’s father, constructed the house while the family was living in the metropolitan area of Buenos Aires. The house was equipped with the most modern comforts: electric light both in the house and the garden thanks to an electric generator, a modern hydraulic system, and an elevator between the ground floor and the first floor.

Coming from a wealthy family, Victoria Ocampo received a rich education. As a child, she became as comfortable speaking English and French as her native Spanish. She wrote mainly in French, and then translated her own texts into Spanish, or had them translated by someone else. These language skills allowed her to get in touch with both the local and the foreign intelligentsia. She traveled for several years in Europe with her family. In Paris, she came into contact with French writers, artists, and intellectuals, whom later she received at her home in San Isidro at Villa Ocampo. When she admired someone’s work, Victoria approached them and included them in the circle that met in her house in Palermo Chico, a wealthy neighborhood in Buenos Aires, and later at Villa Ocampo.

The 700 square meter house stands on a 1.12-hectare plot. Formerly, when the Ocampo family spent their summers there in the first decades of the 20th century, the land extended over 15 hectares. Before passing into Victoria’s hands, the plot was divided, giving it the shape it has today. Villa Ocampo combines French and Victorian style architecture and has four levels: the basement, the ground floor, the first floor and a higher level, invisible from the interior of the house, where the service personnel were housed (cooks, butlers, gardeners). Currently the administration of the house and the library is accommodated there. Victoria combined the rustic with the modern, the classic with the art deco. Bauhaus-style lamps purchased in Europe illuminate the rooms that contain antique chandeliers and armchairs, and 18th century Chinese furniture brought from Paris. Her collection of 12,000 books are scattered throughout the rooms, the desks and the library.

The elegant façade is complemented by loggias, balconies, and terraces that connect the house with the exterior. The garden, which formerly descended through a ravine to the river, was characterized by its rich vegetation, its sculptures, a pavilion and a lake with swans. The connection to water through the lake and the river were lost when the plot was divided.

Illustrious visitors such as Indira Gandhi, Julio Cortázar, André Malraux, Rabindranath Tagore, Gabriela Mistral, Igor Stravinsky, José Luis Borges, as well as dozens of intellectuals who surrounded the writer, spent time in that house. Several exiled artists were part of Victoria Ocampo’s circle. The German photographers Gisèle Freund and Grete Stern—who was introduced to Ocampo by her husband Horacio Coppola, an Argentine filmmaker and photographer—and the multi-faceted Spanish artist Luis Seoane, among many others.

In 1973, Victoria donated the house and its garden to UNESCO, so that it would remain a cultural location. Since then, the house has been the venue of international meetings and celebrations, such as those of the first ladies of the G20. Victoria Ocampo’s house is a testimony to the tastes and customs of both high society and intellectuals in Buenos Aires in the first half of the 20th century. The house is open to the public and the library is a valuable source for scholars. 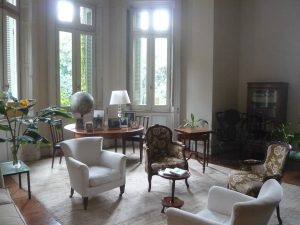 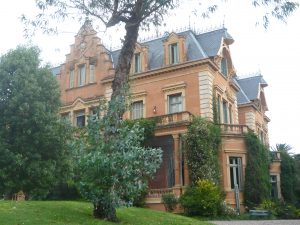 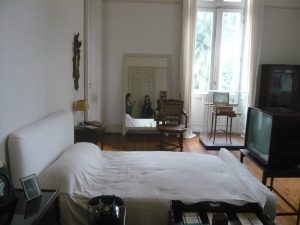 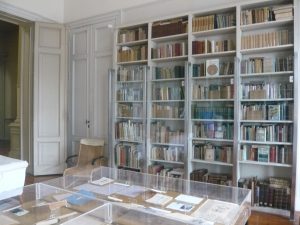