MUNTREF-Museum of Immigration and Center for Contemporary Art

by Laura Karp Lugo
View of Buenos Aires with the Hotel of Immigrants at the back on the shore. Archivo General de la Nación, Buenos Aires, Argentina.

The Hotel of Immigrants in Buenos Aires currently hosts the Museum of Immigration, which is operated by one of the city’s main universities: la Universidad Nacional de Tres de Febrero (UNTREF). Directed by Aníbal Jozami and Diana B. Wechsler (she is the Deputy Director of Research and Curatorship), the Museum keeps the memory of the massive immigration to  Argentina alive.

Built in 1911 to provide protection, shelter and other facilities to immigrants who requested it, the Hotel of Immigrants was active for more than forty years. Indeed, the last of the one million immigrants accommodated at the Hotel was registered in 1953. In the Hotel the immigrants received medical assistance to cure diseases caught on the ships, food and a not very comfortable bed. They were assisted in obtaining residency permission (which was done without complications), they were taught how to use agricultural machines or to join factories, and they also got assistance in finding other types of work. This particular procedure has to be understood in the context of the Argentinian “open door” immigration policy which remained in place without major variations until 1930, despite some regulations and controls.

In 1974, the national government decided that the Hotel would become a museum, but it stood empty for decades. After being declared a National Historic Landmark in 1990, renovation work finally began in 2011 by the UNTREF. Since then, the University shares the building with the National Directorate of Migration, which runs offices and archives there. Since 2011, the Hotel of Immigrants has brought together the Museum of Immigration and the Center for Contemporary Art under the name MUNTREF (Museum of UNTREF).

MUNTREF thus reconstructs and perpetuates historical memory, while at the same time opening it to current reflections on the conditions of immigration and also to contemporary art. It aims to transmit the whole experience of migrating to visitors, starting with the journey, then the act of arrival and then establishing a life in the new country. Different sections display films, photograph, personal objects, letters, documents, and other material. History is mixed with contemporary art by including works by Argentinian artists such as Carlos Trilnick, Graciela Sacco, Gabriela Golder, and Mariano Sardón within the sections. 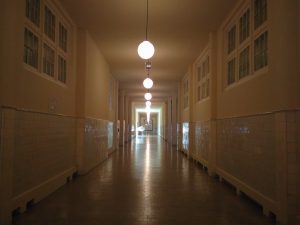 Corridor in the Hotel of Immigrants. Photo by the author. 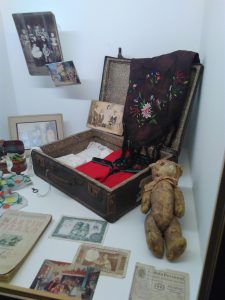 Display at the Museum of Immigration. Photo by the author.