Our team contributed two essays to the anthology “Leave, left, left. Migrationsphänomene in den Künsten in aktueller und historischer Perspektive” which is the result of a conference held on the 20th and 21th April 2018 at the Center for Advanced Studies (CAS) of the LMU Munich in the context of the focus “Representations of Migration”.

With an interdisciplinary approach, the conference and the publication question the relationship and correlations between the arts and migration through different spatial and temporal encounters: How do music, visual art and theatre react in the present and in history to cross-border relocation, to dislocation and transmigration? The contributions in the anthology, which cover various art movements, temporal dimensions and forms of migration and flight, are intended to provide impulses and suggestions for a reflection with the topic of flight and migration, which is more necessary today than ever before.

The title of this anthology – Leave, left, left – was inspired by Jenny Erpenbeck’s novel Gehen, ging, gegangen (2015), with which the author reacted to current flight movements to Germany. Moreover, the temporal conjugation of the verb to leave refers to the different temporalities of an escape, ranging from the decision to leave, to the passage, to the arrival in the destination country. When refugees arrive in a country, the leave becomes the perfect form left, i.e. an action completed from the perspective of the completed present, which lies in the past. However, this past is not necessarily final and can change again at any time, for example when refugees return to their country of birth or migrants commute between their new and old homelands.

In her article “Die (Un-)Möglichkeit der Übersetzung. Migration, Sprache und Medienkunst” Burcu Dogramaci analyses three works by Esra Ersen, Meriç Algün11 and Zineb Sedira, who in the 2000s dealt with the complex of migration and language. Their focus is on multimedia reflections in video and audio installations, using moving images and sound tracks in relation to language loss and acquisition. This can also be interpreted as political positions on language regimes and norms of the host country. Dogramaci argues that language acquisition and language loss as concomitants of migration, exile and escape are not only described in literary, often autobiographical texts on the topic; the visual arts can also use language as spoken and written visual expression and thus add another level to writing, reading and listening. Therefore, the video and audio works pursue different media strategies to investigate the complicated relationship between language, language changes and cross-border changes of location by examining the possibilities and impossibilities of translation and understanding between languages. The power of language – which can separate the native and the foreign into two entities – is then also an important reference in all three works. 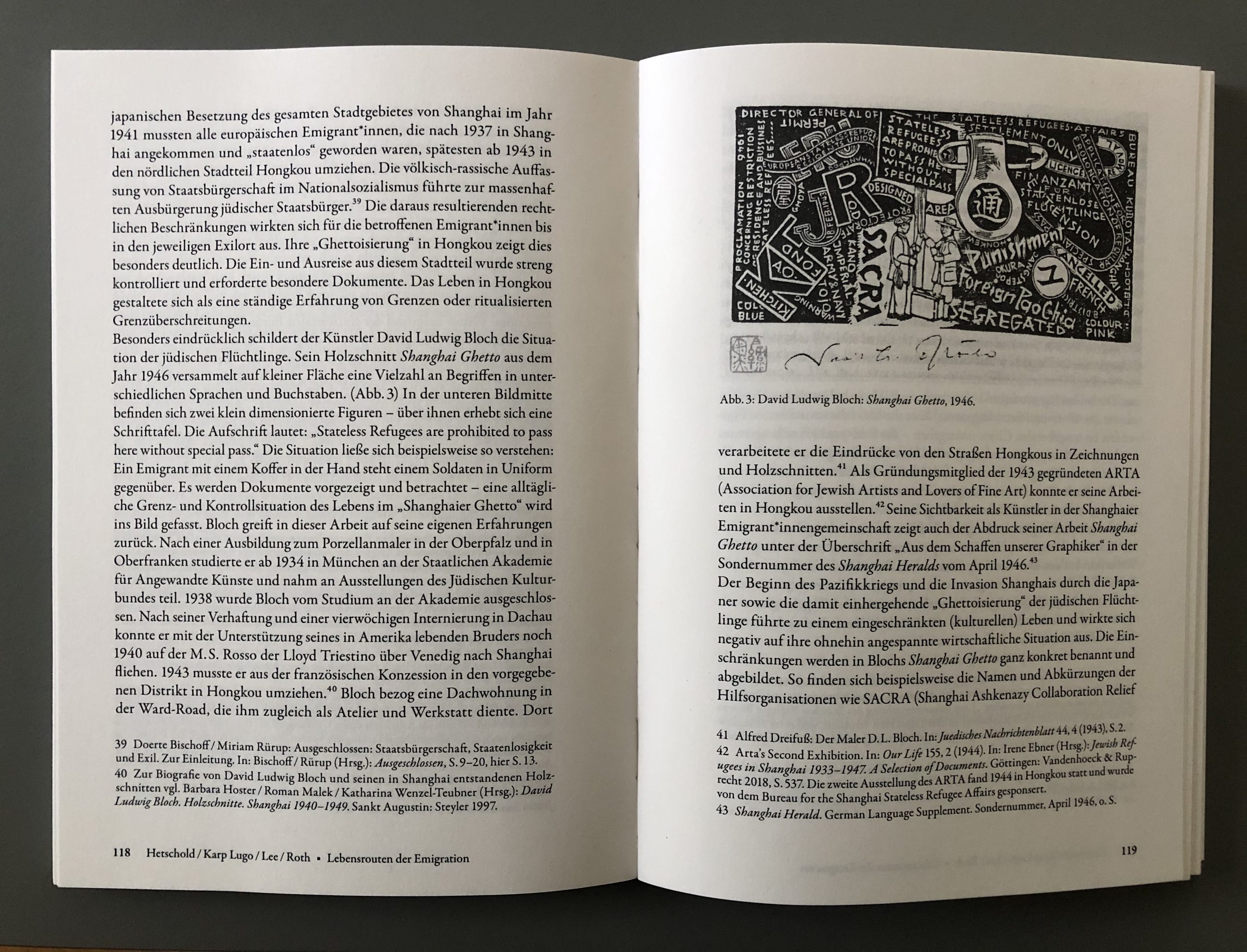 Mareike Hetschold, Laura Karp Lugo, Rachel Lee and Helene Roth co-authored the essay “Lebensrouten der Emigration. Abreise, Passage, (Zwischen-)Exil und Ankunft” analyzing routes into exile which can be divided into several steps of departure, passage, (intermediate) exile and arrival. While focusing on different cities around the world and thereby following the trajectories of four exiled artists in the first half of the 20th century, the different stages of departure, passage, stopover and arrival are investigated in this essay. The selected artists, places, times and works show routes of exile that ran across several continents. The resulting collage illustrates the heterogeneity of exile experiences.

Although departure is associated with a specific and short moment, for many migrants departure is often difficult and they experience it as a long and frustrating process that finally culminates in the actual departure. The example of the architect Otto Koenigsberger analyses the detours and attempts to leave Germany before his successful emigration to India during the 1930’s.

The time between the departure and arrival spent on a ship or other forms of transport can be described as a complex, non-linear and homogeneous transformation process and state of transition. The term ‘passage’ refers to the threshold state in which migrants, refugees and exiles are caught between departure from their country of origin and arrival in a destination country or the various stopovers in a country. The motif of a ship’s passage is investigated through the images of the photographer Richard Fleischhut who captured these transitory and fugitive moments on board ocean steamers on the Atlantic.

Another important sea route led emigrants from Europe across the Mediterranean and the Indian Ocean to China. The end of the long passage and the arrival in the port city of Shanghai also marked the beginning of a stay with an uncertain outcome. In contrast to New York, for example, Shanghai was only rarely an entrance to a permanent existence in exile, which often ended in the Shanghai Ghetto and can be seen as an example of intermediate exile. The examples of the artist David Ludwig Bloch and his woodcuts of the 1940’s describe the situation of the Jewish refugees particularly impressively.

How the arrival and the artistic restart took place in exile is described by means of a painting by the artist Gertrude Chale. During the 1930’s she emigrated from Europe to Argentina and settled on the outskirts of the metropolis of Buenos Aires. This space on the threshold between the urban and the rural inspired the artist to create numerous works in which she explores the conflicts of demarcation and belonging as well as how to approach the existing culture and landscape.

In the theoretical contextualization of the ethnologist Arnold van Gennep with his concept of rites of passage (Les rites de passage), the case studies can be interpreted as different threshold phases, which address different periods of emigration as movements of artistic examination. The moment of departure, the passage, intermediate stops and unforeseeable phases of waiting or arrival appear as central concepts by means of which the heterogeneous experiences were visualized. 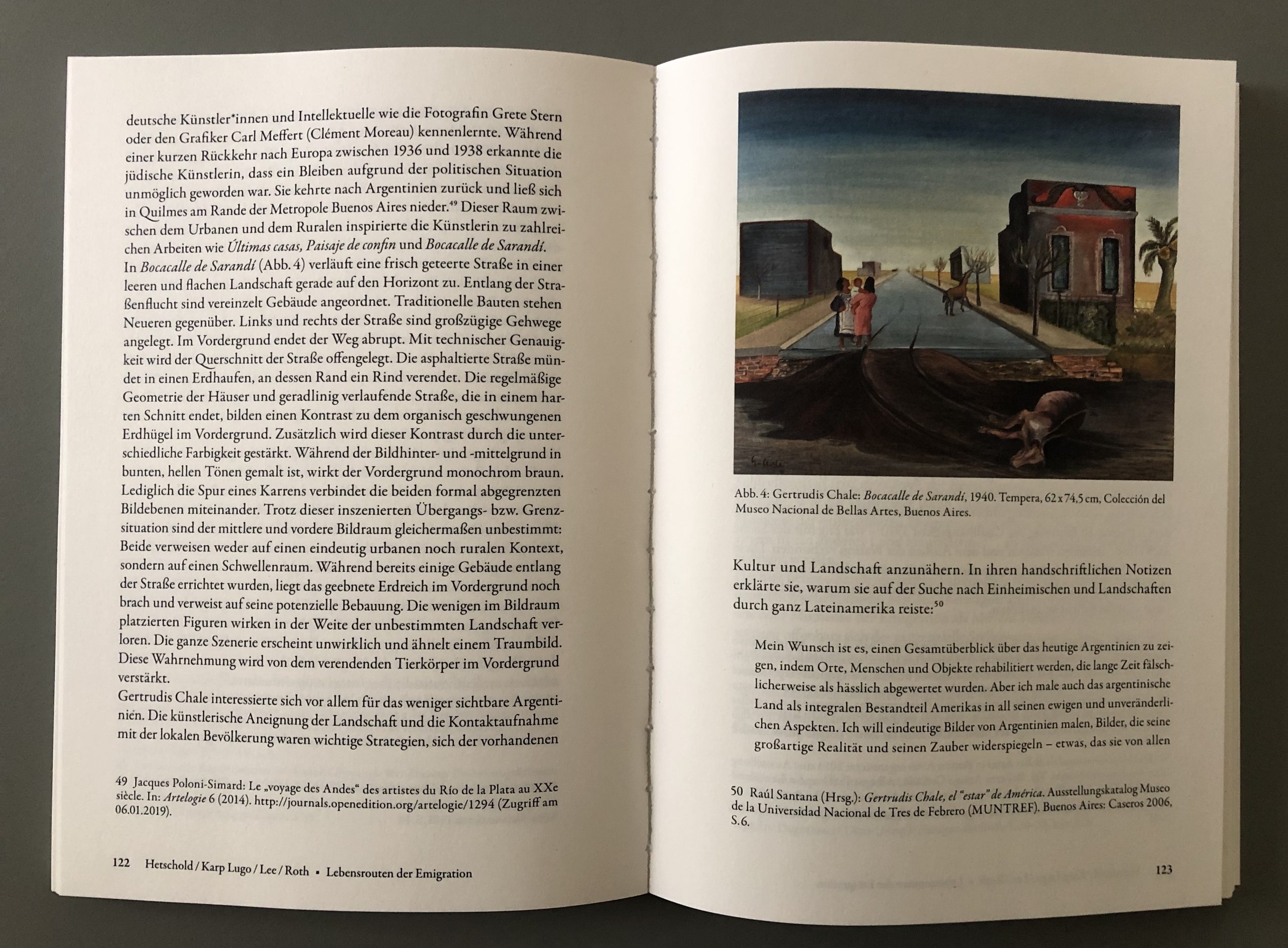 Link to the publishing house: https://neofelis-verlag.de/verlagsprogramm/kunst-architektur/988/leave-left-left