In the first half of the 20th century, Buenos Aires was a major urban center where hundreds of foreign artists settled, looking for a better economic and socio-political environment, or fleeing the interwar famine or Nazi persecution. Indeed, migration waves had been so significant since the 1870s that strong networks of European communities attracted hundreds of artists and intellectuals to choose Buenos Aires as a land of exile. Responding to this cosmopolitanism, journals were published in a range of languages: Argentinisches Tageblatt, The Buenos Aires Herald, Le Courrier de la Plata, La Patria degli Italiani.

Migrant artists received support from communitarian institutions – including the Casal de Catalunya, the Centro Gallego, the Circolo italiano, the Casa de Rusia, the Deutscher Klub, and the Israelite Congregation – which carried out cultural and political activities and helped them to integrate into the local artistic scene. Besides that, local networks were widely open to migrants. Within the cultural milieu, the Association of Friends of Art (1924) developed activities in different fields. The Association of Artists, Journalists and Writers (1936) brought together local and exiled artists and intellectuals committed to contemporary aesthetics and current political issues. Its magazine Unit for the Defense of Culture contains illustrations of artists including the Spanish engravers Pompeyo Audivert and the German Clement Moreau.

The magazine Sur (1931) founded by Victoria Ocampo was to become a major place of encounter in Buenos Aires for nearly two decades. The Jewish-German photographer Grete Stern, the Spanish painter, engraver and designer Luis Seoane, the Czechoslovakian sculptor Gyula Kosice were among the dozens of artists and intellectuals who were part of the magazine’s circle. Gallerists and art dealers with migrant backgrounds – Federico Müller, José Artal, Alejandro Witcomb – also supported these artists by inviting them to exhibit. This rich socio-cultural and institutional context welcomed and fostered the integration of European immigrants in Buenos Aires which was a hub for artists and intellectuals in the first half of the 20th century. 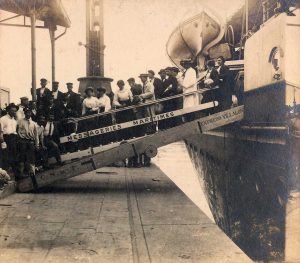 Ship with migrants moored at the dock, early 20th century, … 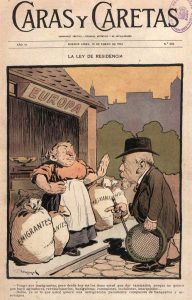