In the United Kingdom, immigration procedures in the first years after 1933 were so restrictive that initially only a few exiles arrived, among them notable artists and scientists. After 1938, the British government introduced a new visa system and relaxed admission requirements. From the November pogroms of 1938 until September 1939, about 40,000 emigrants, including many Jewish refugees, were able to enter the UK. London was the destination for many emigré artists. One of the main self-organized institutions was The Freie Deutsche Kulturbund (Free German League of Culture) with an anti-Nazi agenda, providing its members with visibility and a public platform through exhibitions, concerts and lectures. The Free German League’s clubhouse was located in Hampstead. Mapping the community of foreign and local artists and architects in this quarter it is obvious that they lived and worked close to each other: Ben Nicholson, Barbara Hepworth, Naum Gabo and Ernö Goldfinger shared the same neighbourhood, and not far away Walter Gropius and Marcel Breuer lived in the Lawn Road Flats.

These shared urban areas could be called hubs of architecture and art production and theory. Manifestos like Circle, a book published in collaboration between Gabo, Nicholson, Gropius and László Moholy-Nagy in 1937 could have been prepared in the studios and apartments located in Hampstead. This leads to questions like: How were cities and their artistic topographies changed by the presence of exiled artists? How did the exile experience and the city shape the work of the emigrés, as it is visible in Beautiful London, a photobook (1950) by Helmut Gernsheim? Which neighbourhoods besides Hampstead became home to large numbers of migrants and how did they support contact but also segregation, exchange and isolation? 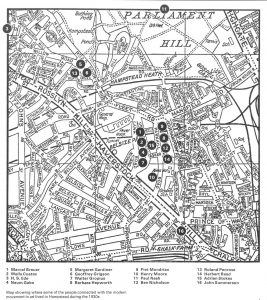 Neighborhood in Hampstead with local artists and emigrants in the 1930s, … 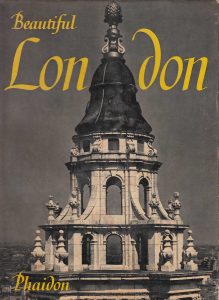