Situated on the harbor, New York was a popular destination for the exilic ship passage from Europe to America. After days at sea, the skyline and the Statue of Liberty was seen by many refugees as a symbol of hope and freedom. German-Jewish emigrants often settled in the quarter of Washington Heights, in the northern part of Manhattan, or the borough of Yorkville (Lower East Side), where they built new communities and social infrastructure. Newly established restaurants and bakeries, such as the Café Vienna, served as important cultural places and meeting points for the European exiled literary and artistic circles, including the network  around the writer Oskar Maria Graf.

Important professional hubs were established in collaboration and exchange with local residents especially in Midtown and Downtown, where they opened new galleries, magazines, newspapers or photo agencies. This is the case for the journal Der Aufbau and the photo agency Black Star, which were directly situated at the heart of the publishing and photo industries – around Madison and Lexington Avenues in central Manhattan. Both Der Aufbau and Black Star provided important professional platforms and networks for emigrated European journalists, writers and photographers during the 1930s and 1940s.

Crucial to the success or failure of the emigrant artists were patrons and gallerists as well as networks and institutions. In 1942 Pierre Matisse hosted a show titled “Artists in Exile” in his gallery featuring Ossip Zadkine, Max Ernst, and André Breton. Also, Peggy Guggenheim’s gallery Art of this Century, which opened in the same year, became an important site for exiled surrealist artists. The New School, which employed emigrants such as German theorists and philosophers, surrealist artists and photographers, was also a key location for artistic and intellectual networking where the emigrants could give lectures, take part in workshops and also had the opportunity to experiment with new techniques. For the artistic and intellectual scene of Europe, New York was the cultural capital and center of American exile. 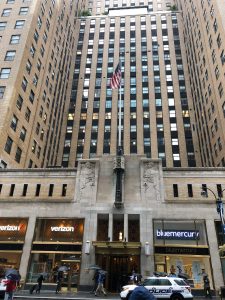 Graybar Building, 420 Lexington Avenue, where the Black Star Agency was founded and based…